A review of Addition by Toni Jordan

Given the candy-colored cover and the peek-a-boo picture of the heroine, one might be forgiven for thinking that Addition by Toni Jordan is another in a long line of similar chick lit novels. Certainly Addition has wit and humor but it's the appealingly quirky (some might say crazy) heroine that rules the pages. And that crazy adds depth in this Australian debut which I recently pulled off a shelf of older "to be read" books (yes I have shelves of books that are tbr, don't judge).

A review of Exit West by Moshin Hamid

This is Portland, Oregon's "Everybody Reads" book for 2018, so I was reading it for a book group discussion. Nadia and Saeed first meet at a class; slowly we are drawn into their world in an unnamed country teetering between a secular government and a fundamentalist takeover. They fall in love and hope to have a normal life in their country, but as things get more and more dangerous they begin to search for a way out.

A review of Runaways. Vol. 1, Find Your Way Home by Rainbow Rowell

I will gladly read the telephone book if Rainbow Rowell writes it, so of course I am going to read her new continuation of the comic book series Runaways. 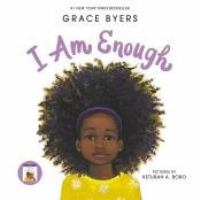 A review of I Am Enough by Grace Byers

A beautiful picture book celebrating girls! Simple text, "Like the sun, I'm here to shine. Like the voice, I am here to sing," make the book accessible to preschool aged children. The use of similes make it something that early elementary school students will enjoy and can think of wonderful things to compare themselves to. The main character and a diverse mix of friends are shown singing, playing, studying, and even falling and getting back up again. Some of the rhymes don't quite work, but the book still has a lovely message of love, helping, and celebrating who you are.

It’s nearly June and the new books are bustin’ out all over. Summer kicks off with the requisite beach reads, but the month also seems some gems coming from classic fantasy and mystery authors, as well as some solid releases from buzz worthy literary names. On to the selections:

A review of Archetype by M. D. Waters

The Handmaid's Tale is terrifying and fascinating all at the same time. And it got me looking for readalikes. One such is Archetype, a great debut that read like a cross between Before I Go To Sleep by S. J. Watson and Hilary Jordan's When She Woke (another great option if you're looking for more like Handmaid's). In Watson's book the female protagonist wakes with no memories and must learn who she can trust.

A review of Sophia's war : a tale of the Revolution by Avi

Newberry Medalist, Avi, writes a gripping story of the American Revolutionary War through the eyes of Sophia Calderwood.  Sophia, a well-educated young lady, lives with her parents in British occupied New York.  Her beloved older brother is a captured soldier in the Continental Army and her parents are secretly committed to the cause of the American Patriots.  Sophia, herself an ardent Patriot, wants nothing more than to help the cause and free her brother from a horrific British prison.  She is enlisted as a spy; however, the plot she uncovers is almost too outrageous to believe!  Can Soph