Well this is awkward... 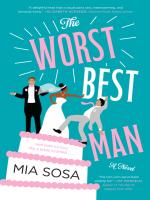 A review of The Worst Best Man by Mia Sosa

It’s the perfect wedding: not surprising, since the bride is a wedding planner and she’s created her dream ceremony that is as much a statement of her success as a businesswoman. It has to be, since Carolina Santos has worked too hard and her family has sacrificed too much for her to suffer another financial and emotional setback. But just as she’s about to walk down the aisle, the news from her groom, Andrew, comes through his brother Max, the best man: Andrew’s gone and there will be no wedding. And Max might have been the one to convince him to run off.  Lina can only make two conclusions: she’s heartbroken and Max is truly The Worst Best Man.

A wedding coordinator left as a jilted bride?  Lina feels the irony bitterly, but three years later, she’s mostly moved on and is about to make a pitch that could make her name in the competitive D.C. wedding business and mean financial security. One catch: the bid means working with a marketing partner in a competition against another planner and marketer, but Lina’s confident she can nail the presentation. And then she meets the marketers—who just happen to be Andrew and Max. In a moment of coordinated panic, they all feign not to know each other. Suddenly, Lina has to sell her reputation as the perfect wedding planner with Max’s help, without letting on to her potential boss that not only have they met before, but were almost in-laws. And as much as she would love to outbid Andrew, she’s not keen on letting Max get too close since her heart is still bruised. Max has always lived in his elder brother’s shadow, and he wants to win this pitch as much as Lina does. But he can’t ignore the feelings he’s getting whenever he’s with Lina—and they’re not just based on animosity. Can she stop seeing him as a reminder of her biggest hurt and start seeing him as the potential way to happiness

Mia Sosa takes the classic enemies-to-lovers story and gives it a fun twist in the world of wedding planning. Lina rings true as a heroine: she’s a bit prickly, having been burned not just by Andrew in love, but also in her prior career as a paralegal. The pressure she keeps herself under to succeed and do right by her immigrant family that has sacrificed for her adds to her characterization. Sosa draws her extended Brazilian family with humor and depth. Max also is well done; if the predicament that Lina and he find themselves in is rather usual, the sorts of mistakes he makes and his attempts at redemption in Lina’s eyes ring true. Sosa hints that the families and their stories introduced in The Worst Best Man will continue for a future installments; a good thing as the series is off to a strong start. Fans of Helen Hoang, Christina Lauren and Tessa Bailey will want to check it out.