Politics of the time 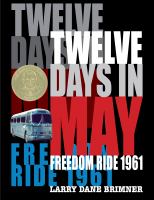 A review of Twelve Days in May: Freedom Ride 1961 by Larry Dane Brimner

Despite these rulings the practice of segregation continued in many States and Civil Rights groups decided to protest the ongoing rights violations with such actions as lunch counter sit-ins and integrated interstate bus rides that brought needed media attention to these injustices at grave risk to the activists who participated.

Twelve Days in May won the Sibert Award for the most distinguished Non-Fiction book for children, and Brimner does an exceptional job of presenting this time in U.S. History. He places the protest ride in the context of the politics of the times and presents the protesters’ heroism and the very real dangers of their actions without sensationalism. He employs photographs from the ride to profound effect, and the book design intersperses black print on white and white print on black in thought provoking ways. For me, the most stunning (not in a good way) photo in the book is an image of two white children both under the age of ten, looking out a car window. The boy is dressed in KKK garb, and taped to the car door is a sign that reads, “Southern whites are the negroes’ best friends but NO INTEGRATION.”

This book provides an important close-up look this event and its impact on the history of race in America.