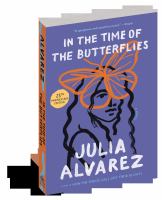 There are so many compelling stories exploring Hispanic heritage in its many forms, but this is one that I've read more than once and learned a lot each time.

Set during the 31-year brutal regime of Rafael Trujillo in the Dominican Republic, this book is a fictional account of the Mirabal sisters (Las Mariposas) -- revolutionaries, but also fully fleshed female characters in Alvarez's novel. She does a good job of not romanticizing them, weaving day-to-day familial, romantic, and domestic moments in with their political activism. They aren't just caricatures of feminists; their relationships with men and with each other are complex, and the dialogue between all the characters shows that the heroism the (real) Mariposas are known for is actually a series of difficult choices they had to make over and over again. It's also interesting and important to see the role women -- obviously the sisters, but also other women along the way -- played in the revolution, in big or small ways.

The story is told from different perspectives in the form of diary entries, reminisces, and traditional narrative, so you get a good sense of the women's personalities, and the change in perspective keeps the momentum of the story going. Recommended if you're a fan of history and family sagas.

We're in the midst of Hispanic Heritage Month (Sept. 15-Oct 15) and there are book and other events going on across Madison Public Library to celebrate. You can check them all out here.