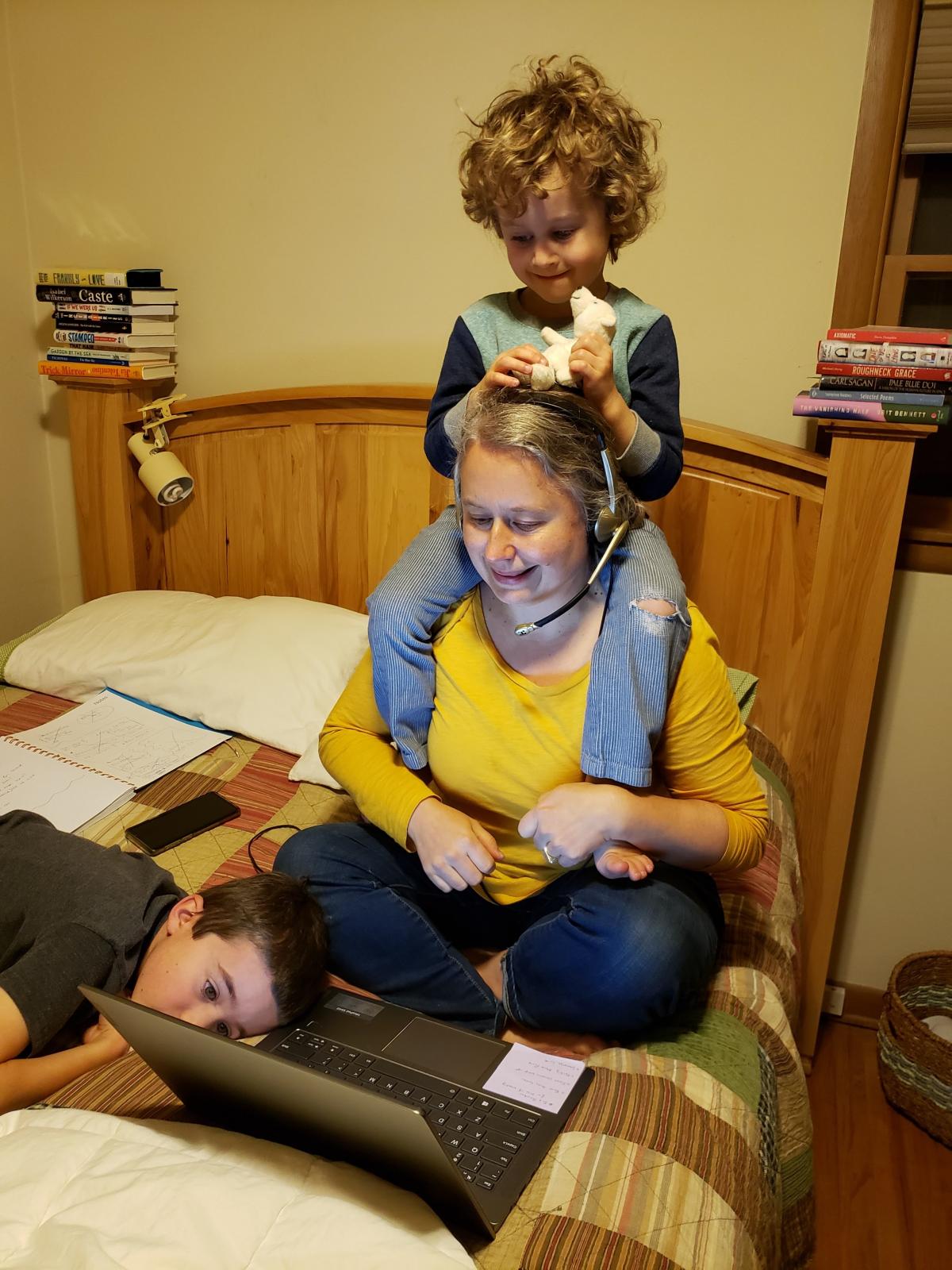 In the winter of 2021, youth service librarian Tracy's husband shared a photo of Tracy’s “new home office” on social media. Tracy sat in a chair in their living room with her computer on her lap, headset on, and a look of intense concentration while her two young kiddos built Legos in the background.

Even though Madison Public Libraries remained mostly closed to the public during the pandemic, a majority of library services didn’t stop, including reference services. They simply shifted from librarians answering questions at library desks to answering questions from their living rooms or kitchen tables.

The library invested in technology that would allow the public to call one central number, that could be routed to one of the 22 computers at home with a librarian. During the pandemic, it took about 200 staff hours each week to keep up with the demand. When a patron called to receive help placing a book on hold or to find out more about rent forbearance or where their polling place was located, the occasional dog bark or kid playing came through in the background.

Rerouting all of the calls was a big logistical puzzle. “It took 5 weeks, which felt so long at the time!” Community Engagement Librarian Neeyati told us. “I seriously commend the staff who are doing this. There are a lot of challenges with providing a public service on your own internet connection, as opposed to a city network with a whole team of IT support. Not to mention how hard it is to do reference work in isolation. We’re so used to turning over our shoulder to a colleague and asking for help, and now we’re on our own.”

From April 2020 when the service began to April 2021, librarians have fielded 69,470 calls in person and over voicemail, with 6,852 additional call backs as librarians reached out about voicemail questions or called to follow up on more complex questions. Not to mention an additional 120 email reference questions and 300 librarians’ pick requests each month.

As it turns out, not only was our team up to the challenge, but they actually increased the level of service to provide additional support for the City of Madison.

We needed people whose skill set included excellent customer service and maintaining a high standard of excellence in their work. Librarians were a natural fit.

In the spring of 2020, the City of Madison received a grant from the Cities for Financial Empowerment Fund (CFE Fund) to provide more comprehensive financial resources to people in need during the crisis. Upon receiving the news, Iliana Wood from the Community Development Division decided that one of her first calls needed to be to Krissy Wick, the Director of Public Services at Madison Public Library.

“We needed people whose skill set included excellent customer service and maintaining a high standard of excellence in their work,” Iliana told us. “Librarians were a natural fit.”

Madison Public Library lent both staff and technology to the process so that Madison residents seeking help with financial concerns due to the COVID-19 pandemic could contact a free hotline that offered help in multiple languages. The diverse pool of library workers helped make it possible for the Financial Resources Hotline to offer service in English, Spanish, Hmong, Mandinka and Wolof, with additional languages available through the city's translation service.

When someone calls the Financial Resources Hotline, it rings to the library (or you know, to a librarians’ kitchen table), and they are connected to a librarian or Community Development Division staff member with financial navigation training. 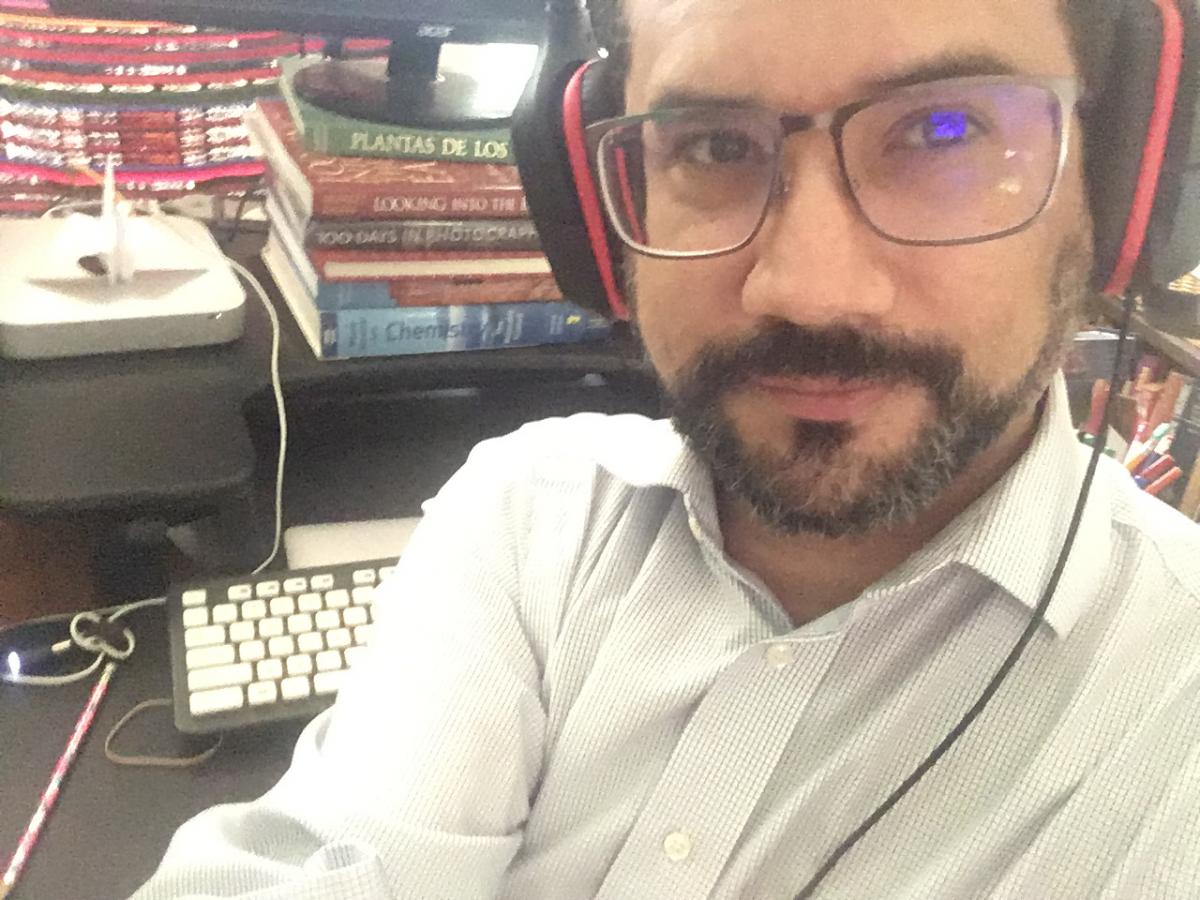 “Financial Navigation is a lot like what librarians typically do,” librarian Lori told us.  “We connect people to information and resources they might not know about."

Financial Navigators have access to a comprehensive database of resources built by the Community Development Division and the CFE Fund to address personal financial issues, identify immediate steps to manage expenses and maximize income, and make referrals to other services such as bill paying assistance, government benefits and other programs that may come from future stimulus packages. The whole team works together to update the database with new resources every day.

Despite some similarities between general reference work and Financial Navigation, there was still a learning curve for library staff, who felt the weight of this new responsibility.

“Being a Financial Navigator is really rewarding, but also very stressful. You don’t want to let people down, this is really important for them,” Lori added. “But I am really, really glad we're doing it. It is super important. In almost every call, I am able to tell someone about something they didn’t know about. I may not always have the answers, but I am able to give them recommendations of the right person in the right agency who can help them,” continued Lori. 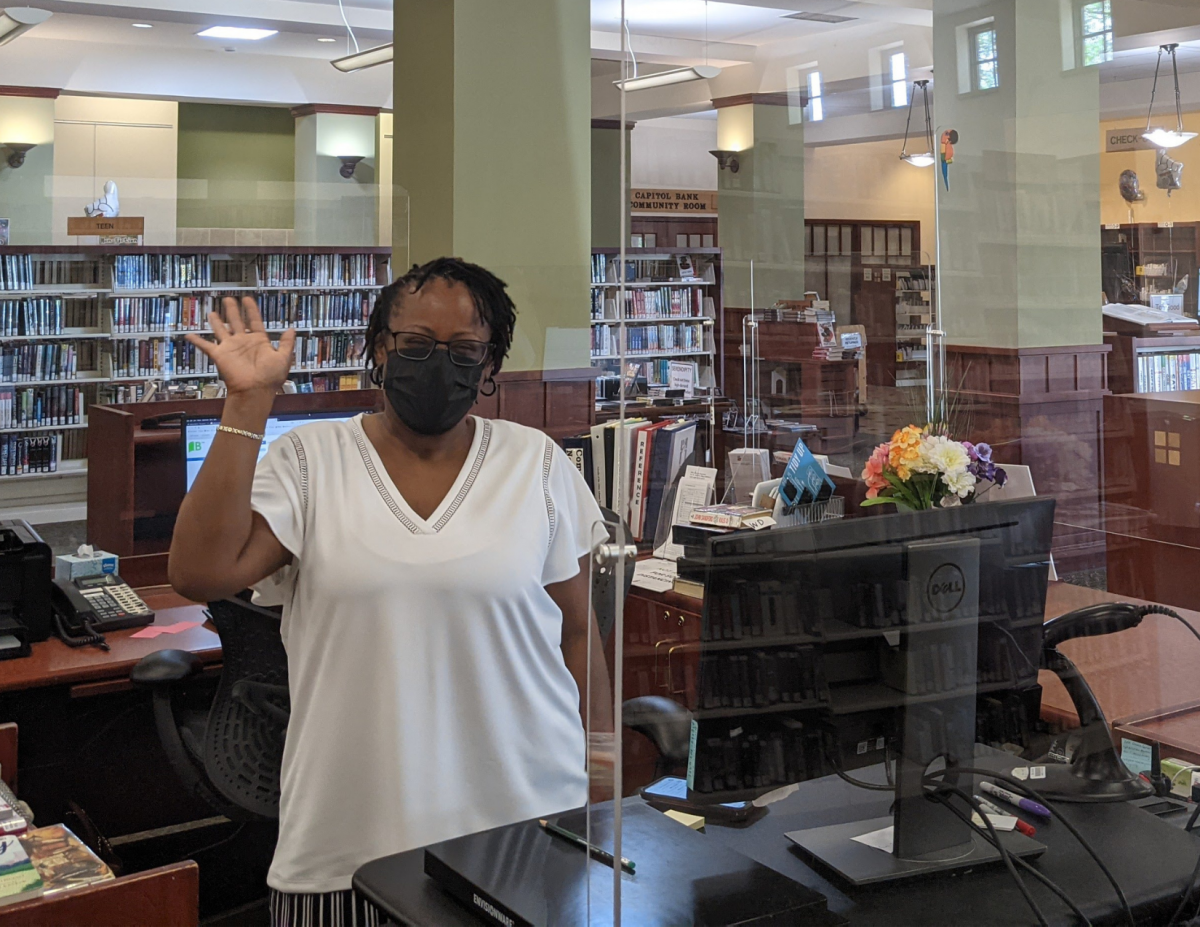 Librarian Kim, back at the reference desk at Alicia Ashman Library to field patron requests and questions.

Often being a respectful, listening ear is a huge help in itself.

“I’ve had people call when they got a bill they were really scared about. It was nice to just have another set of eyes on their situation,” said Community Engagement Librarian Martin. “We have been able to give our undivided attention to just talk through things. I often can help them find creative solutions with lots of small options, rather than one big thing. Like lowering the cost of their internet or finding food resources that help save money in other places.”

Since October, Financial Navigators have fielded over 345 calls.

“It has been great working with so many really competent and dedicated librarians who see their mission to serve the public and go to great lengths to find information for people,” said Wood. “They have a very high ethical standard and respect for the callers who are in a time of need.”

And the public is appreciative, too. The overwhelming feedback from financial navigation surveys is gratitude. “People are grateful they were listened to and are treated with compassion as they received help to sort out their next step,” said Wood.

The library has been privileged to lend a hand throughout the pandemic. As we've transitioned back to in-person service, those same library staff are waiting with a friendly word at the end of the line or across the reference desk to help field questions about books, library services, community resources and much more. Call (608) 266-6300 weekdays 10am-6pm or Saturdays 12-5pm for the centralized reference number.

The Financial Resources Hotline will be available to serve the public through the end of September 2021.