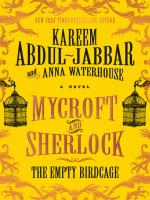 A review of Mycroft and Sherlock: The Empty Birdcage by Kareem Abdul-Jabbar and Anna Waterhouse

Has there ever been a character that has inspired other writers so much as Sherlock Holmes? The world of the quintessential English detective has expanded and reimagined to include Holmes-like detective on the western frontier, an unlikely apprentice to Holmes, Holmes as a consulting magician and the alias of Charlotte Holmes, the real genius behind the myth of Holmes. One of the newest series to be added to the world of Holmes comes from a surprising source. Kareem Abdul-Jabbar is of course best known for his epochal basketball career, but since his retirement, he has turned his hand to various other pursuits, gaining fame for his writing and activism. But it’s less known how big a fan of Holmes he was, a passion that has teamed him up with screenwriter Anna Waterhouse to start a new series of Holmes mysteries featuring the Holmes brothers. The latest, Mycroft and Sherlock: The Empty Birdcage, catches the brothers at the cusp of their careers. Sherlock is chafing to leave Cambridge to pursue some unknown career that can satisfy his curiosity and as yet undisciplined but formidable intellect. The older Mycroft has already established himself in the War Office for his particular skills in diplomacy and espionage, but is not yet the shadowy, omnipotent figure of the canon. Mycroft is dismayed when Sherlock shows up on his doorstep when news of a mysterious serial killer appears in the newspapers. Mycroft has been tapped by Queen Victoria to look into the affair when a distant relative falls victim to the killer. Since he’s only able to follow the case through the frustratingly obtuse lens of newspaper reports, Sherlock hijacks Mycroft’s name and uses some extralegal techniques to learn how the seemingly impossible crimes could happen. Meanwhile, Mycroft is distracted by the disappearance of a young Chinese man who could be tied to an arms dealer hostile to British interests. It grows increasingly complicated when he learns the young man is engaged to marry the same woman Mycroft pines after. Are the cases related? And what could the varied victims possibly have in common?

Abdul-Jabbar and Waterhouse evoke 1870s Britain well and the mystery is compelling and fast moving. But the best part of the re-imagining is the choice to capture Holmes at the very start of his career. Here, Holmes is still raw. He hasn’t entirely developed the cool reasoning or discipline so intrinsic to his later career, nor has he even developed the concept of a consulting detective. Mycroft too is still learning his place in the world, and the tough decisions he faces in The Empty Birdcage help to explain how he became the powerful, yet remote, man of later years. Abdul-Jabbar surrounds the brothers with an interesting and diverse supporting cast adds richness to the story and whose particular knowledge helped the brothers solve their cases—and sometimes just survive to solve crimes another day. The Empty Birdcage is nominally the third in the series that began with Mycroft Holmes, and while the story alludes to earlier events in the series, the titles can be read out of order. Abdul-Jabbar and Waterhouse’s Holmes is a good pick for anyone who’s a fan of the classic English mystery, likes a historical setting with a bit of action and deduction or anyone who is interested in a re-imagined origin story for one of literature’s most enduring characters.