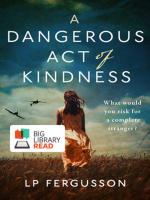 It’s nearly (official) summer and with the warmer temps comes OverDrive’s Big Library Read. This year’s selection is L. P. Fergusson’s World War II-set drama A Dangerous Act of Kindness. When Widow Millie Sanger finds downed German pilot Lukas Schiller on her property, she tends to his injuries and shelters him to ensure he isn’t discovered by the authorities. It could be a disastrous decision: England is at war with Germany, and the discovery of an enemy combatant on her farm could mean death for both of them. Thrown together, they form a bond out of necessity, but soon find that connection turning to something deeper. But Millie’s act of compassion puts both on paths that they never dreamed of, and pits them against those that they are closest to. Depicting rural England during World War II, Fergusson’s novel delves into human nature with people facing their greatest challenge, and reveals how even in their darkest hours, people are capable of kindness.

The eBook edition of A Dangerous Act of Kindness is available to all users without waiting June 17-July 1. Join the wider conversation with OverDrive’s discussion board, and listen to an interview with the author.  Online discussion will continue through July 8.