I miss you, Joan, but I'm trying hard NOT to keep everything. I'm glad you did, though. 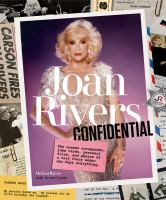 A review of Joan Rivers Confidential: The Unseen Scrapbooks, Joke Cards, Personal Files, and Photos of a Very Funny Woman Who Kept Everything by Melissa Rivers and Scott Currie

Melissa Rivers and Scott Currie compiled this phenomenal tribute book to Joan Rivers. It's a massive tome, coffee-table-sized, 336 pages, and approximately five pounds full of the queen of comedy's memorabilia organized by decade. Scrapbook style, with photographs of joke cards, letters, scripts, and even a report card from first grade, this book is a wonder to me as a fan and librarian.

Somebody saved all of this stuff and cataloged it. Much of the cataloging was done by Joan's late husband, Edgar Rosenberg, and her assistant, Currie.  There were storage lockers full of scrapbooks, boxes of clippings and photographs, and file cabinets of jokes to go through after Joan passed away in 2014. There were 55 scrapbooks alone. The expense of monthly fees to keep all of this primary source material in storage is mind boggling. But such a treasure. And to have it lovingly compiled into the best of the best?  Priceless.

All of Joan's jokes were indexed and cross-referenced on 3-by-5 note cards. There are samples of the joke cards included in the book, for example, Career (see also Early Career, Acts I Worked With, Clubs I Started In) and multiple type-written scripts from The Tonight Show. This is all fascinating, but what I most enjoyed were the personal photographs: Joan as a baby and young girl, with her daughter Melissa in 1989 when she received her star on the Hollywood Walk of Fame, Joan with her beloved grandson, Cooper, and Joan and Melissa on the red carpet.

This book truly is a glimpse into the confidential life and times of a woman who paved the way for the female comedians of today.  I encourage you to take some time to savor it. If you haven't watched Joan Rivers A Piece of Work: A Year in the Life of a Semi-Legend on DVD, you should check that out, too.