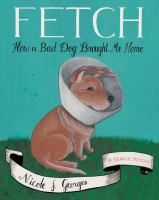 A review of Fetch: How a Bad Dog Brought Me Home by Nicole J. Georges

Nicole Georges had a messed up childhood with a mom who didn’t parent very well and a drunk step-dad who was cruel to her gerbil. Nicole loved animals and had a whole menagerie, but like her mom, she didn’t give her charges what they needed most, and they suffered. As a teenager she adopted Beija, a sharpei/corgi mix, to give to her boyfriend in an attempt to heal his unhappy past. Unsurprisingly his parents didn’t go along with the plan. So Nicole was stuck with  Beija, who was prickly, growly, and disliked men and children. Over the 15 years of her late adolescence and early adulthood with Beija, Nicole learned how to care for Beija while learning to care for herself. At one point she made a scarf for Beija that read, DON’T PET ME, a sentiment many of her women friends could relate to. Everyone - dogs, animals, humans - has a right to not be touched, to set boundaries, and to not have expectations of their behavior to be loving and cuddly just because they are cute or look a certain way.

Georges began drawing animal portraits to make money. She discovered zines, and their memoir quality appealed to her, so she made many zines of her life with Beija. Her style is at times cartoonish and at other times finely representational. Her first graphic novel, Calling Dr Laura, was a highly enjoyable coming of age and coming out story. Fetch is a fun read, but really you should also read Calling Dr. Laura. There is more emotional depth in her story of finding love in Portland, as well as an intriguing family mystery. Lots of dogs also appear, as you might expect, and twenty-something girls wearing animal hats. Why do there seem to be so many queer graphic memoirs? I don’t know, but I like it.