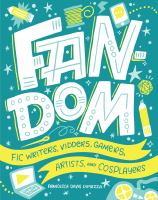 This is written for teen readers, but actually a good overview for anyone interested in the alternate world that is fandom. Included are brief interviews with fic writers, as well as short histories or back stories of how fandom evolved ranging from masquerades to Arthur Conan Doyle to Star Trek (which really increased both the number of people involved and the visibility of fandom in popular culture).

These days, a lot of the activities described pretty much take place on-line, which is very different from when I first became involved in British media fandom, including shows such as Dr. Who, Blake’s 7, Robin of Sherwood, and other television shows. Then access to fan fiction in zines involved attending meetings, or conventions, and in fact, often even access to viewing the shows was only available at such gatherings since they were not broadcast on American TV. Given all that, there is broader ability to find people who share your interests but (and I think the author does not stress this enough) I think there is huge value in finding ways for face to face contact for sharing your interests, whether it be in local writing/film/art groups or finding your way to a convention.

I for one, have many long-term friends that I first met while waiting in line for a panel or autograph session at a convention, who have enriched my life in many ways past that one common interest. Also, remember that fandom is not restricted to science fiction or written and filmed work—just look at the followings for 2018 Olympic figure skaters Yuzuru Hanyu and Adam Rippon. I am pretty sure even as I write this review, someone is writing, drawing, creating based on these two men!

Special thanks to Barbara S., librarian at Hawthorne Library, for bringing the publication of this book to my attention. When I checked on it at my local library, it was not owned; but shortly after placing a request it was purchased and put on hold for me. Libraries Rock!