An Eye for Fashion 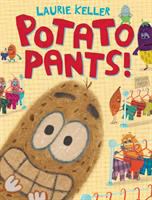 A review of Potato Pants by Laurie Keller

All you spuds looking for duds, “Lance Vance’s Fancy Pants Store” is having a big sale on potato pants.  Hurry, hurry, hurry because “Once they’re gone, they’re gone!”

Potato has been excitedly anticipating the day of the potato pants sale.  There’s a pair in the window with stripes and suspenders that he’s fallen in love with and he is intent on getting to the store early, before they sell out.  Except, once potato gets to the store, he sees his nemesis through the window. Eggplant.  The one and the same Eggplant who pushed Potato right into a trash can just the day before, yelling, “Out of my way!” Potato is sure Eggplant will push him again if he goes into Lance Vance’s store.  What’s a bullied potato to do? Potato tries to wait out Eggplant – after all it’s not an eggplant pants sale – to no avail.  Potato tries avoidance; maybe the grocery store has potato pants, since they have potatoes.  But, alas, Potato strikes out there, too.  Finally, Potato realizes there is only one pair of pants left in the store. He’ll have to pluck up some courage, and face that vegetable.

Laurie Keller does an excellent job of depicting the inner turmoil involved when children anticipate difficult confrontations, and she provides a sensitive and satisfying resolution to the standoff. This is a perfectly pitched enemy-turned-friend tale for 4 – 8 year-olds.