Count down to Caldecott 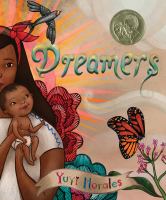 Every year the American Library Association’s Caldecott Committee chooses the "most distinguished American picture book for children" from the previous year. This year’s award-winning books will be announced on January, 28th.

Zola’s Elephant by Randall de Seve
Illustrated by two-time Caldecott honoree, Pamela Zagarenski is the story of a little girl who imagines that the girl who moved in next door already has the best friend/pet that anyone could have – an elephant. So all of the sights and sounds she notices coming from her new neighbors house must be the new girl feeding, bathing, and making a club house for her elephant. At last, curiosity wins out over imagination and the little girl goes next door and meets her new neighbor, and that’s when the real adventures can begin.

Ocean Meets Sky by Terry Fan, illustrated by Eric Fan
This title has so much illustrative information to pour over as readers meet the little boy, Finn, whose beloved grandfather has passed away. Finn decides to visit the place his grandfather told him about – where ocean meets sky – by building a boat (out of scrap wood, an old tire, a window frame, with some old clothes for the sails. After building, Finn is ready for a nap, and lays down in his makeshift craft.  And then the waves come in and lift his boat off to sea to an adventure with talking fish, whales, and so much more.

Dreamers by Yuyi Morales
Using vibrant acrylics, pen, and photographed collage work, Morales relates the story of her and her baby boy’s immigration to the United States. She conveys the strangeness of life in a new land and unfamiliar culture, and then the liberating wonder of the free public library she and her son discover and begin to frequent. A beautiful ode to books, libraries, expression and aspiration.

What Do You Do with a Voice Like That? by Chris Barton, illustrated by Caldecott Honoree, Ekua Holmes
Congresswoman, professor and speaker Barbara Jordan accomplished much to celebrate in her all-too-brief lifetime and Chris Barton and Ekua Holmes share a portrait of this amazing leader and teacher.  Holmes’ mixed-media illustrations glow with a strong color palette and give readers plenty to ponder and revisit.