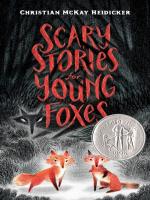 It’s been a while since I’ve read really a good anthropomorphic novel (stories where animals take on human characteristics). When the ALA awards were announced and Scary Stories for Young Foxes was named a Newbery Honor, I figured it must be special. Special is only one of the many ways to describe this book. Harrowing, magical, sad, corrupt, and resilient are other words that come to mind but once you read it you’ll have your own words to describe it.  “All scary stories have two sides,” says the old storyteller to the seven fox pups eager to be frightened. They are warned about being too young and not being able to finish the story and because of that, they could possibly be haunted by just parts of it and not understand it in its entirety.

The scary story consists of eight tales following the growth and journey of two pups, Uly and Mia. They are joined by events that take place in the natural order of forest life with distressing elements that truly make this a horror story for young foxes such as the “yellow disease,” an elusive but dangerous Golgathrush, a Mr. Scratch, whom you’ll hopefully despise as much as I did, and a different take on a well-known author in the animal storytelling world. This story includes haunting black and white illustrations by Junyi Wu.

Scary Stories for Young Foxes is recommended for ages nine and older, but appeals to all readers that can withstand an adventurous, gratifying tale that includes violence, abuse, and separation. Read-alikes include Watership Down by Richard Adams and Poppy by Avi.

Be brave and read the book. You won’t regret it.