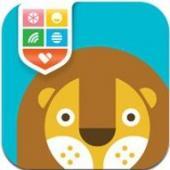 A modern, interactive alphabet book that encourages kids to trace letter shapes at the end.  Each letter of the alphabet is hidden within an illustration of an animal that begins with that letter (e.g. there’s a letter A hidden within an angelfish drawing).  Read or listen to the narrator read a rhyming couplet about that letter (generously filled with words that start with or include the featured letter of that page), then tap on the picture to find the hidden letter and a surprise animation. The rhymes include some great “rare words” (like “flippant” and “ornery”) to increase vocabulary. When you’re done going through the alphabet, the app invites kids to choose their “special letter” and then trace the letter (a capital that may or may not match the exact shape of the letter hidden in the animal which are a mix of capital and lower-case) with their finger (or toe!). One note for crafty users -- they did say “quilt” when they really meant “knit,” but the app is so beautifully designed otherwise that I’ll let that slide. The surprise animations are just right -- they relate to the text and are short enough to not de-rail the pacing of the book. The parents section also includes some tips on prompt questions you might ask your child as you enjoy this app together.