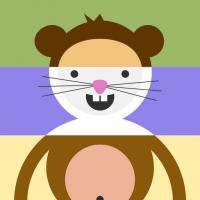 Slide the slices of an animated picture until you find the animal the app is asking you to find in this mix & match game. Start each session by choosing whether you want your screen split into two, four or six slices, then, either choose an animal or the app will randomly assign you a completed animal picture and ask, “Can you find this animal?”  Users slide the slices to toggle between 30 different animals (some with very similar colorings to other animals) until they find the assigned animal.  When the animal is correctly reassembled, users are rewarded with an audible “hooray,” a toss of confetti and a dance (pretty much the same animated dance for every animal).  While this app is nicely illustrated and has a fine gameplay, I personally prefer Yatatoy’s Miximal app which has the same mix & match game action, but also includes mixing and matching the syllables of the animal’s name, users can choose to put together whichever animal they want to, and any time an animal is reassembled, users are rewarded simply with one silly animation, unique to that particular animal.  Miximal also has the capacity for 5 different languages whereas Toddler Zoo simply has the capacity to toggle the sound on and off.  If you have a child who LOVES mix and match animals, there’s no reason not to own both, but if you really only need one, I highly recommend choosing Miximal instead.