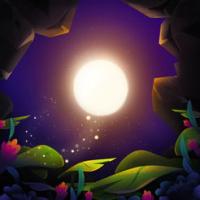 Help a tiny floating ball of light travel through dark tunnels and reconnect with all of its light-ball friends. If you go too long without finding a new friend to recharge your light with, your light will fade out and you'll be returned to the beginning of that maze or to the last orange flower that blossomed along your path. This app is darker and moodier than all of the rest of the apps by this developer, so it feels more appropriate for a slightly older audience. If your child would be scared by shadowy goblin characters with white eyes this might not be the right game for you.  If your child might be distraught by the light dying or getting trapped by falling rocks, or if they would be unduly frustrated by being sent back to the beginning, check the settings and switch to "explorer" mode where those limitations are eliminated! The game also requires a measure of impulse control as tapping on the screen doesn't make your light go faster, it simply makes it float upwards (which is a little counterintuitive but ends up being the "thinking" work of the game). The design of the game, despite its darkness, is lush and beautiful with nice touches like the soundtrack sounding "underwater" whenever the light floats into or through a pool of water. Because you can't hurry the light along, and because the soundtrack is rather dreamy, this can be a relaxing app to play (especially in explorer mode!).  If you enjoy the app and want more, there is an option for an in-app purchase to unlock the entire game once you've played through the initial levels.  The app also includes 13 different language options for both the narrator and the written text on the screen (English, Chinese, Dutch, French, German, Italian, Japanese, Korean, Portuguese, Russian, Spanish, Swedish, Thai, & Turkish).