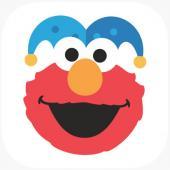 Have you ever wanted to dress up as a character from Sesame Street?  Now you can do that on a screen! You can "dress up" as one of 6 different Sesame Street characters through the magic of Augmented Reality (AR), just look into your device's camera and suddenly, you'll appear on the screen with Elmo's head (or whichever character you've chosen)!  You can also sing as that character, play some on-screen games as that character, or add silly accessories like outlandish glasses or party hats. The app is free to download and you can try out Elmo's head and 3 different interactive game/song/activities, but you'll have to pay a one-time fee to unlock the rest of the characters. The on-screen games include concepts like shapes and letters. You can also record videos of yourself singing as the characters and, if you want, you can save those recordings to your device to share them with a friend. After you're done playing with this app, think about what other ways you could dress up at your house.  Even if you don't have Sesame Street costumes, what could you use to dress up as other things? Could socks become the paws and ears for a puppy costume? How about an empty box for a hat? If you have access to a printer, the app developer's website has a few printable masks you can create for free.  There are so many silly ways to pretend to be someone else and this is an important part of children's emotional and social growth.  Who will YOU be today?