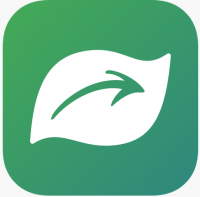 Have you ever been on a nature walk and seen a plant or bug or fungi that you'd never seen before and thought, "I wonder what that is?" Good news!  There's now an app for that!  To be fair, there have been a number of apps over the years that have tried to offer similar functionality, but this is the best one I've ever used so far.  All you need to do is open the app and point your camera at a living organism and it will work on identifying it down to the exact species.  Sometimes it only gets as far as the genus or the family, but especially if you're viewing it live (as opposed to a still photo) so that the sensors get a good 3D representation, it's amazingly effective!  Once it's got a lock on the species, the app invites you to take a photo, adding it to your "collection" of identified species. The app then provides a short descriptive paragraph and some data about that species if you want to learn more. Users can earn badges or work their way through "challenges" if a little competitiveness is a motivator. Even if you're not crazy about your kids using apps, this one is worth considering as it is best used when you're being active and you can learn so much while using it.  Plus, it's free and available for both iOS & Android devices!