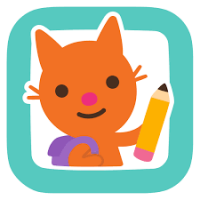 If you've been following my reviews for any amount of time, you know that I'm a big fan of the Sago Mini apps because they feature open-ended play and are perfectly suited to younger users but still entertaining enough to attract older kids as well.  I was a little concerned when they unveiled this new subscripiton based app called Sago Mini School, but I am pleasantly surprised.  Instead of being all about teaching discrete skills with only one right answer, they've done an excellent job of including open-ended exploration while weaving in some informational content.  They bill the app as being "curiosity-led" and have done that by organizing the app according to general topics (so far, bugs, big trucks and rainbows.  Gardens is coming soon and more will be released in the future!). For each of these topics, they have a wide selection of activity areas (no text to label each area, just a simple picture that kids can understand or at least be curious about). Activity areas might include super short videos about a related topic (different each time you scroll past!) or an open play area similar to their other open-play apps or maybe a shape or a letter that you can trace with your finger or some free-doodling options with prompts, or a building game that has no wrong answers or even a virtual pop-up book!  There is a ton of content in this app and they're adding more all the time.  It's free to download and test out for a short while, and if you want to continue using it, there are subscription options.  There's also a free companion Parents app that will keep you updated on your kids' activity on the app.