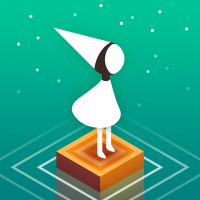 Three dimensional mazes with optical illusion solutions reminiscent of the artwork of M.C. Escher elevate this app above other puzzle apps. The ethereal mood and gorgeous color scheme are just icing on the cake. This is one of those rare apps that are equally engaging for parents and children. As we played it together, my son (4 years old) would often discover the solution before I did (I am not surprised by the results of this scientific study). There are occasional encounters with mystic gurus along the path who say mysterious things that aren't crucial to gameplay, but other than that and a few instructions very early in the game, it is wordless. We were excited when an expansion pack was released recently, but users with very sensitive children should be aware that there is some "hot lava" and slightly more menacing music in the first game of the expansion pack and a few other somewhat more tense moments than exist in the original set of mazes, but as long as you're playing side-by-side, sensitive children should be fine.  Don't miss the sequel-- Monument Valley 2!