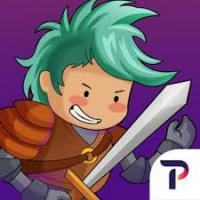 TouchPress
Reviewed on 12/16/20
Freemium on iOS

A clever word-building game! The main story in this app is that 7 swords have been stolen and need to be recovered. The majority of the game play consists of one-on-one battles against either an automatically generated opponent OR another player (with a pass-and-play option). The way that you battle is by spelling words.  Each player has a set of letters to choose from (similar to Scrabble, each letter is assigned a point value) and you can spell any word (the app does block swear words). Once you've spelled your word, you click on the "attack" button and however many points you used in your word is removed from your opponent's score.  The REALLY impressive part is that your character will find a way to use the word that you've spelled to taunt your opponent.  For instance, if you spell, "FIND" your character might say, "they're going to FIND your teeth in the next country." (occasionally the sentences don't quiiiite make sense like "This is going to hurt like a CLOSING" but overall, it's a pretty impressive trick considering users can type ANY word they can create from the letters provided.) There are also areas of the app where you can customize your avatar and purchase tools, spells and powers to assist in your battles. This app does contain a LOT of written text and no "read-to-me" option, so it's better suited to fairly confident readers. You can download this app and play portions of it for free, but for full access, there's a one-time fee to unlock the whole app.