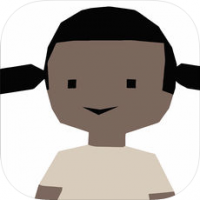 What can you create in Lexi's World? Spell a word and see it come to life in Lexi's World!  With a unique choose-your-own-adventure spelling mechanism that makes this app accessible to even younger users that don't have alphabet knowledge, this app brings the joy of seeing words turn into objects and actions to every user! When you type one letter from the keyboard, the rest of the keyboard turns gray except for a few options for your second letter, then the third and subsequent letters are usually only one option each, leading users to spell pre-determined words. Each time a letter is pressed, users hear the name of the letter spoken aloud.  Once the word is spelled (e.g. cat, run), either that object appears in Lexi's World, or Lexi herself does the action.  Beautiful in its simplicity of concept and design, I also appreciate that Lexi is a child of color! This app was made by the same app creator as one of my long-time favorite story apps, Red in Bed and I am thrilled to see him still creating apps -- teeny companies like his are an increasing rarity in the app store, but often come up with the best new apps.