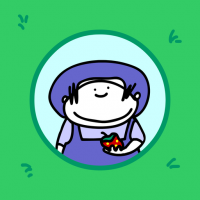 A multiplayer strategy game with lots of options to customize preferences. In this game, players can choose what sort of garden they want to play in (a kitchen garden or a bed of tulips), how many players (1-4) and whether they are real people sharing this app with you or whether you want to play against one or more "computer players," which language you want to play in (English, Dutch or French), and several more options specific to the game. Once you've made your choices, players will see a grid of circles. Most of the circles will have either a food or a tulip or one of 4 special objects (like a 4-leaf clover) that indicate special actions (like a "wild card"). Each player then chooses a corner to start from, then takes turns moving into adjacent circles to collect the objects in the circles. You can make the game more challenging by hiding the objects (you can see them between turns but not when you're playing, so you have to remember where the objects you want are located). You can also play objects on your opponent's side, so there's lots of strategy and logic involved. Perfect for families who like to play games to use in places where it's inconvenient to bring along a whole board game (like a restaurant!).