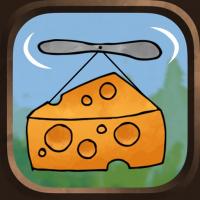 The original Hideout app was one of my first reviews for this site.  Amazingly, that app is still around and has had elements added to the original "treehouse" to make it even bigger.  Now, there's also another Hideout app called "Flying Kitchen" that features a (you guessed it!) flying "kitchen" and four new suffixes for kids to explore.  Each suffix has a game based on rhyming words which include that suffix (e.g. "ash" has a game with the words, "smash" "stash" and "trash" -- you stash the trash into a trash pit and then click on a stomper that comes down to smash the trash).  The wonderful acapella music is exactly the same as the original (I found out that the app maker actually recorded all of the singing himself using just his own voice and the Garageband app!).  A solid choice at a bargain price for beginning readers!