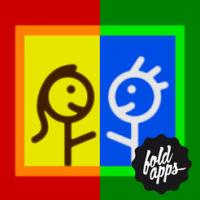 Who's the fastest draw?  Challenge a friend (or a parent!) in this two-player drawing game.  Choose from the pre-designed drawings (from simple shapes, numbers and colors to animals, vehicles, flags and traffic signs) or design your own drawing for users to color.  The screen is set up so that two users draw the same picture at the same time on their own half of the screen.  Points are awarded for being the first to finish and for having the most accurate drawing.  There's also a weighted feature, so if two players have played each other a few times and one consistently wins, the difficulty will increase for them by slowly fading the drawing out (otherwise, a pastel version of the drawing stays on the screen the whole time and you're pretty much coloring a picture). You can choose between a fat pencil line or a thin pencil line and there's an eraser just in case! "Tournaments" between two players can be 5 rounds, 10 rounds or infinite. This is another great app for multiple players to play at the same time, building relationships through technology!