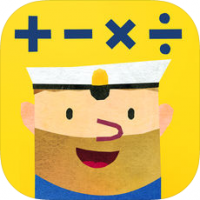 Practice your math skills with this motivating app!  Each time you solve the equation correctly, Fiete the Sailor gets to jump up to the next spot on the sidebar.  Sometimes he lands on a coin and that coin goes into your bank. Other times there are other objects in his path (like pinatas or rockets or bombs) and each of those objects has a special feature. Once you’ve earned enough coins, you can go into the shop and purchase a new character.  Do you want to be a ballerina? Or do you want to really save up to be the toilet character? Although I’m not usually a fan of skill-drilling apps or apps in which players earn “coins,” this one I’ll make an exception for. For one thing, they keep it clean and simple enough to not be overwhelming while adding in just enough extra bells and whistles to make it interesting and motivating.  They’ve also incorporated algorithms that track how quickly and accurately you solve the problems and adjust the complexity of the math to match the player’s pace. There’s a parent dashboard with tons of statistics if you’re into that sort of thing and you can also customize which sorts of skills you want to focus on. A step above flashcards if what you need is practice, practice, practice.