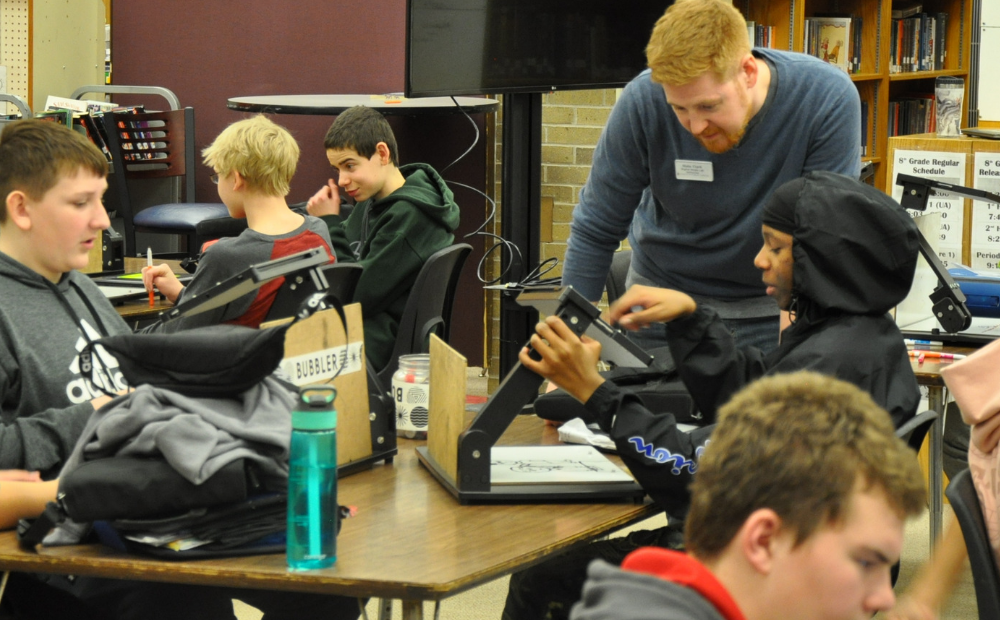 Initially the idea of teacher Katie Imhoff, Power & Legacy is now an 8th grade tradition. "Power & Legacy came from a trial open mic for my students years ago. We wanted to capture student voice." Katie reflected, "We started by allowing them the opportunity to share through any form of writing or poetry or song.  Students loved it and it had a natural celebration tied in."

Each 8th grade student now has the opportunity to decide on a legacy message they want to share with the whole school. The topic is entirely up the the kids - everything from protecting our environment, to keeping police and guns out of school - and so is the medium. Students create lyrics, poems, animated shorts, or visual pieces of art to convey their message.

Choice is paramount. "Our students benefit from having ways to express their identity and their ideas in creative ways.  This opportunity allows them to contribute without being told what or how to say their ideas," Katie shared. 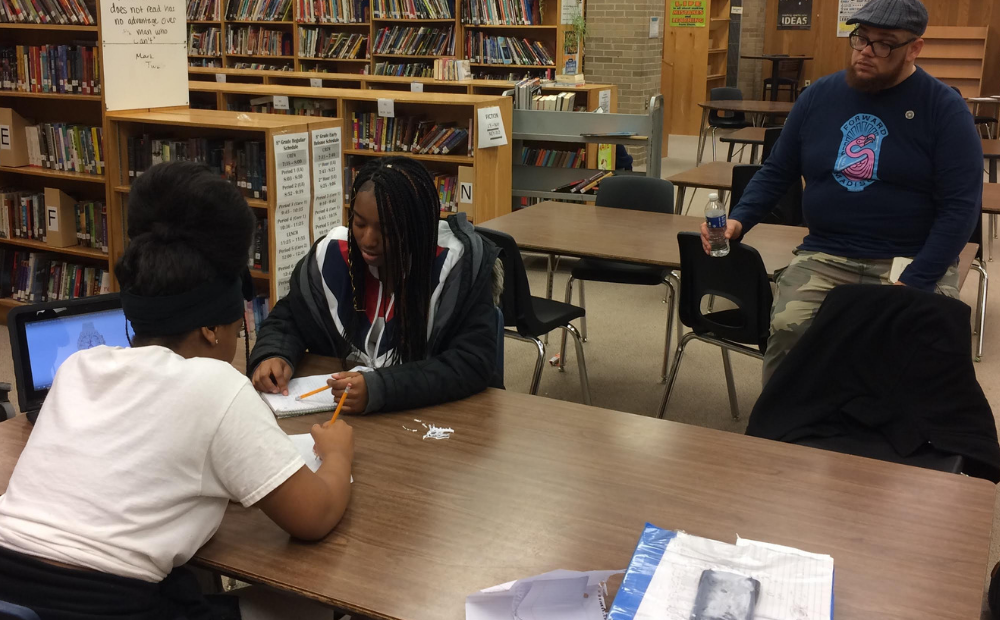 "The library's participation has opened up the possibilities for what the projects can look like," said Katie. "The expertise and adult presence helped students engage in more authentic ways."

"This is the kind of service we are really striving for. Connecting youth to artists and makers from the community to empower them to find their own voices." Jesse said.

This year, thanks to funding from the Bubbler Making Spaces grant, Rob was able to join the team full time, and the library added Richard Jones of Oddly Arranged Media and screen printer Lesley Numbers to the mix, arranging beats for student lyrics and translating student art into posters and t-shirts. 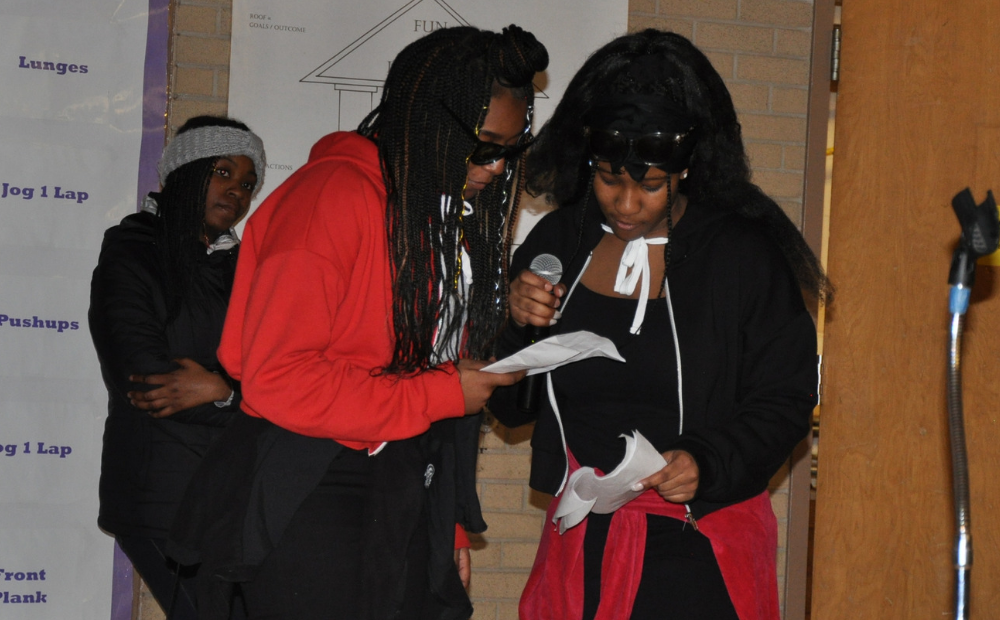 At the end of three weeks each student shares their legacy with their class before finalists presents at a school wide, open community assembly. We got to talk to several of the finalists as they polished their projects.

Performed their hip-hop legacy together. "Our legacy is being able to leave our names behind like we want them. For people to know US, not about us." - Zynae

"We like rapping a lot. Sometimes we get in trouble for it. Have the choice to do the project made it better. Doing something we like to actually share with people" - Nyjaha 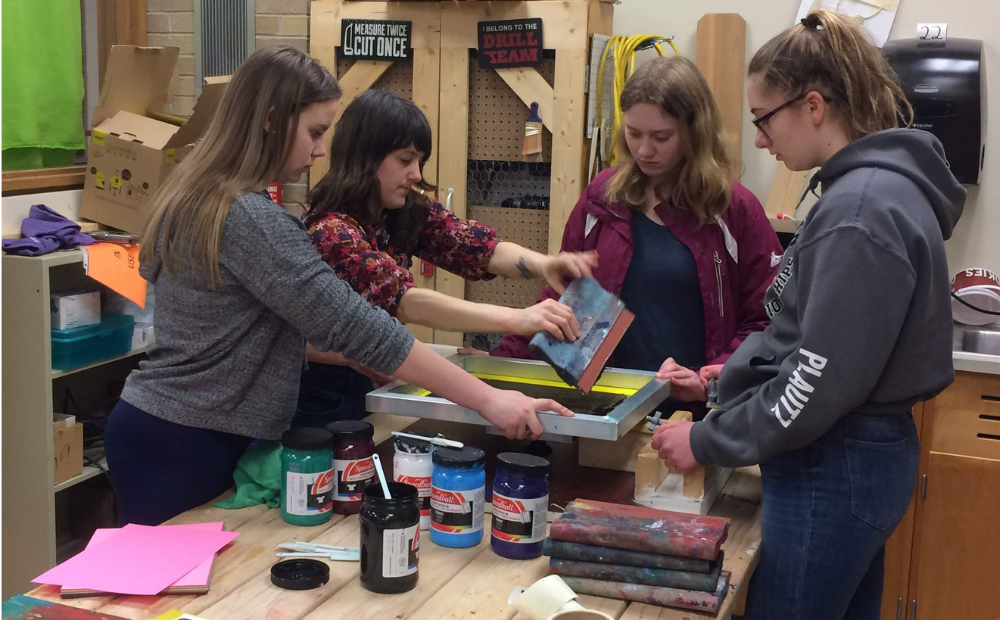 "I wanted my legacy to talk about how we are losing beautiful natural spaces. Coral Reefs, glaciers, and the rainforest, but with a sunrise to represent hope."

"I really liked getting to choose what I want to do. I really like art, but. I’m not in any art classes this year, so it was an awesome way to get to do a project with art." - Eva

"My legacy was about equal pay for men and women. Men are getting paid more than women, especially in sports. I heard that the US women’s national soccer team filed a suit. I play soccer and I thought that was really cool and wanted to learn more about it and share with others."

"Being voted a finalist was really cool, your classmates voted for you and they believe in you. It shows they care about the topic and want to stand up for it." - Ali 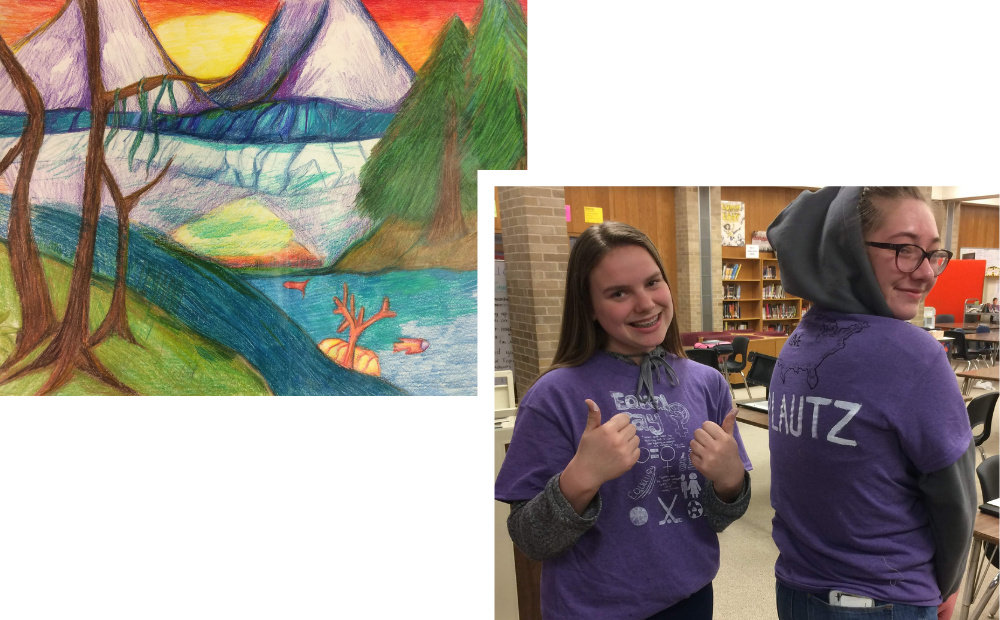 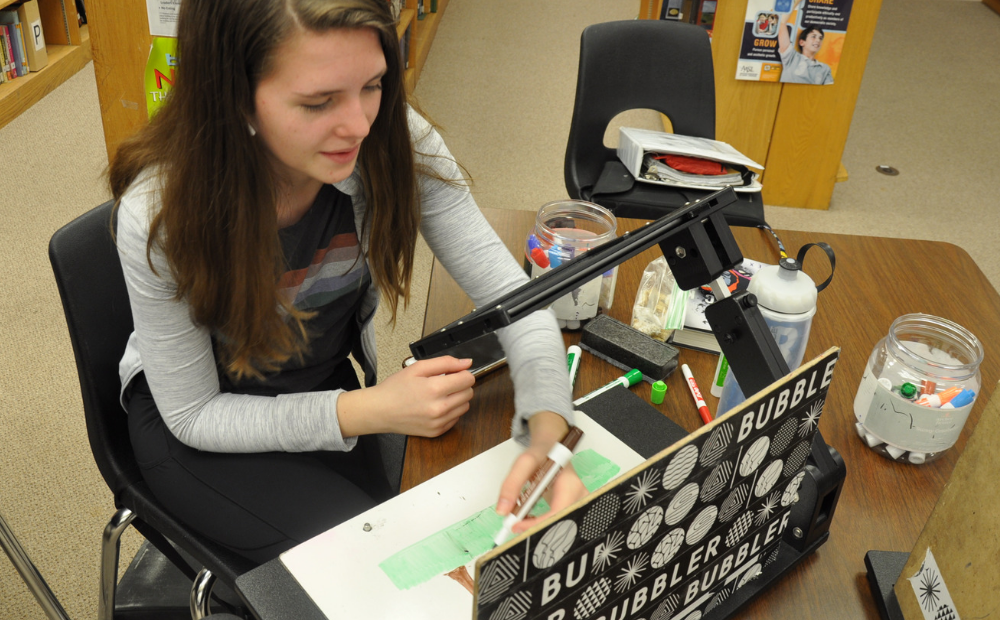 "My legacy is about helping homeless people. When I was younger, I went to Seattle and saw a kid who was on the street by himself, he was my age, and it just really influenced me."

"It was fun to be able to choose the topic. I’m not really good at art. I always like techy stuff and animation seemed really cool. Nate helped me a lot to get started. I had to draw for animation, but it didn’t feel like the pressure of art stuff." - Zach

"Gun control is something that is a really big issue with my family. We have lost people to guns. There are guns in schools, but we don’t get to voice our opinions about this topic. Adults get to make these decisions without us, but we are the ones being effective and we get to speak out about it. I really made this into a tribute to my cousin Tony Robinson and I’m glad I got to share it."

"I was happy we were able to choose what we were passionate about. How we want to leave our legacy. What our point of views were about it, and how we want to make a difference. " - Olivia 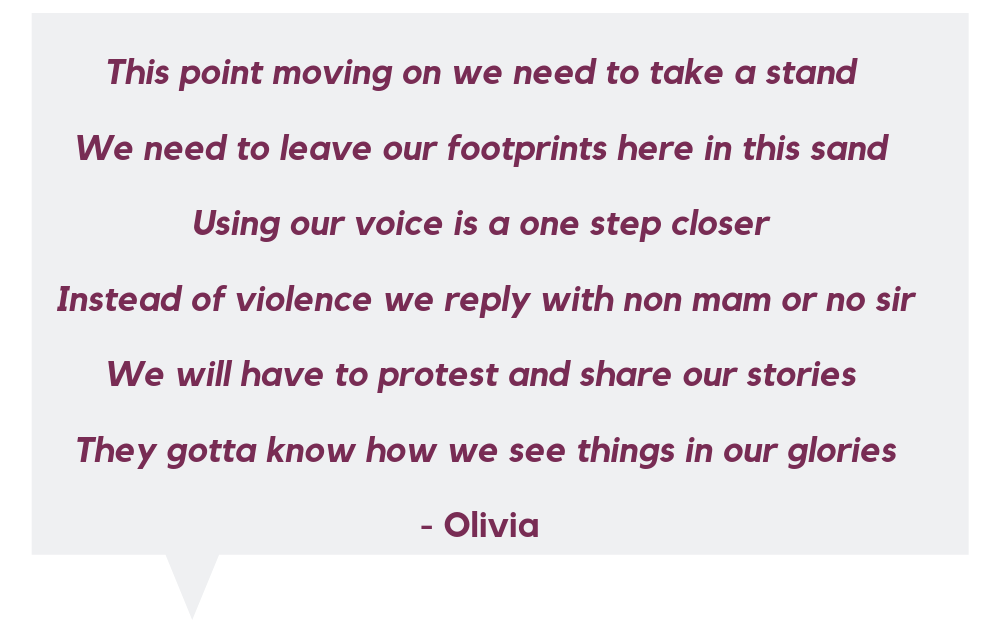 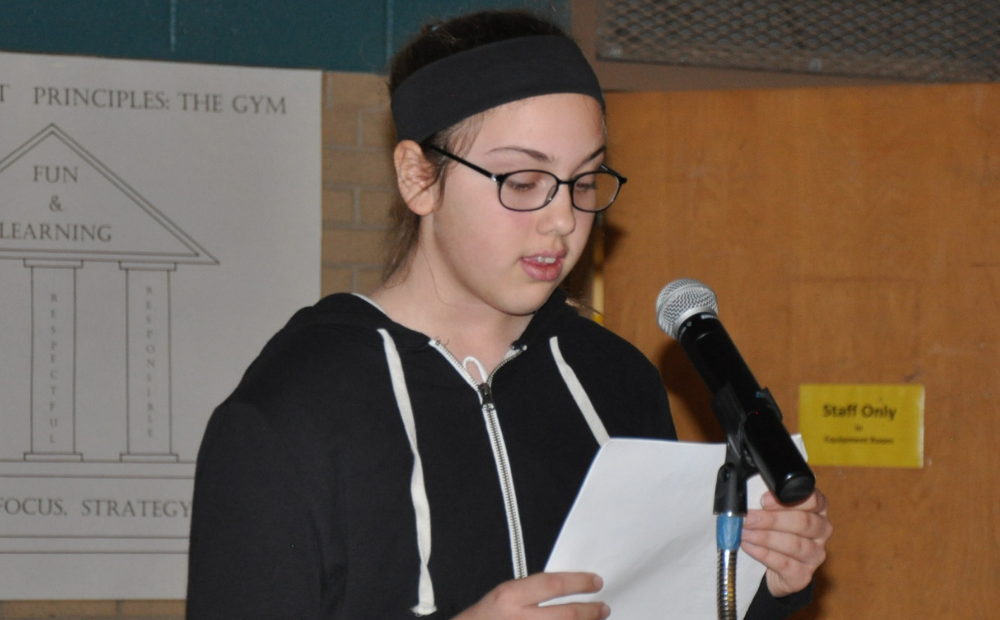 Empowerment to Speak Out

Sitting together at the final Power & Legacy assembly, the Bubbler team was amazed and energized by the student presenters.

Near the end of the assembly, when all the students were starting to get a little twitchy, Ashley came to the mic to share her legacy. As a child, Ashley was the victim of abuse from her mom's that time boyfriend. The oldest sibling, she found herself regularly protecting her little brothers and sisters from harm. The entire crowd was silent, listening intently as she shared about her survival, their escape, and how it has impacted her.

Sharing so openly and vulnerably, Ashley hoped it would encourage others to not stay silent, but speak out about abuse.

At the end, she thanked her family, all of whom were in the audience, including her new mom's new husband, who was showing them what a real father was like. The audience irrupted in applause as Ashley went to sit with her family. She can be sure her legacy will stay with us for a long time.