Home > Reading and Viewing > Book Lists
Back to top

Seeing Things: A Kids’ Guide to Looking at Photographs

This is your go-to guide for looking like you know what you’re talking about on museum field trips! The author takes readers on a journey through the power and magic of photography: its abilities to freeze time, tell a story, combine several layers into one frame and record life's fleeting and beautiful moments. Impress your teachers and friends alike with your photography savvy. 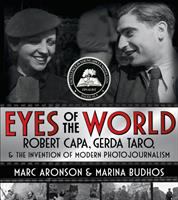 Eyes of the World: Robert Capa, Gerda Taro, and the Invention of Modern Photojournalism

Robert Capa and Gerda Taro were young Jewish refugees, idealistic and in love. As photographers in the 1930s, they set off to capture their generation's most important struggle—the fight against fascism. Among the first to depict modern warfare, Capa, Taro, and their friend Chim took powerful photographs of the Spanish Civil War that went straight from the action to news magazines. They brought a human face to war with their iconic shots of a loving couple resting, a wary orphan, and, always, more and more refugees—people driven from their homes by bombs, guns, and planes.

Today, our screens are flooded with images from around the world. But Capa and Taro were pioneers, bringing home the crises and dramas of their time—and helping give birth to the idea of bearing witness through technology. (Amazon)

The deep and enduring friendship between Vincent and Theo Van Gogh shaped both brothers' lives. Confidant, champion, sympathizer, friend—Theo supported Vincent as he struggled to find his path in life. They shared everything, swapping stories of lovers and friends, successes and disappointments, dreams and ambitions. Meticulously researched, drawing on the 658 letters Vincent wrote to Theo during his lifetime, Deborah Heiligman weaves a tale of two lives intertwined and the extraordinary love of the Van Gogh brothers. (Amazon)

Our phones have more technology than it took to send people to the moon, so why shouldn’t you use them to create the next film sensation? You should and you CAN, with help from this guide.