A review of If His Kiss is Wicked by Jo Goodman

I'm a fan of historical romances but it's getting harder and harder to find the meaty, complicated ones that I sometimes like to sink into. Current publishing trends seem to have veered more towards lighter, sparkly fare (which I also enjoy, don't get me wrong). So in order to get my angsty fix, I decided to delve into the backlist of an author I enjoy.

It’s almost August! School is a mere month away, but there’s still some time to squeeze in the last of summer’s big titles. On to the top offerings for this month:

A review of The Revolution of the Moon by Andrea Camilleri

The news of the recent passing of Italian novelist Andrea Camilleri means a great loss to the mystery readers, as Camilleri was particularly known for his Inspector Montalbano series set in contemporary Sicily. Yet the late-blooming Camilleri (he wrote his first novel in his sixties) was remarkably prolific, writing close to a hundred novels in a variety of genres, notably historical fiction. Born in Sicily, Camilleri had a knack for mining the island’s rich history and culture.

A review of A Quick & Easy Guide to Queer & Trans Identities by Mady G.

This is recommended reading in tandem with A Quick & Easy Guide to They/Them Pronouns by Archie Bongiovanni and Tristan Jimerson.

It is bedtime and little rabbit has much to do to get ready for bed, so he needs the reader’s help.  Toddlers tap, clap, fluff (a pillow), and even give rabbit a kiss to help him through his bedtime ritual.  This is just one of the Little Rabbit series that is sure to be popular with young readers. Other titles in this interactive board book series are Bathtime for Little Rabbit, and Poor Little Rabbit.

A review of Dead Wake: The Last Crossing of the Lusitania by Erik Larson

Ask anyone about a notorious shipwreck, and they will more than likely respond with the Titanic disaster of 1912. Yet a mere three years later, another grand ocean liner met an equally disastrous fate, the repercussions of which would be felt far beyond those immediately involved. The Lusitania was the giant Cunard liner that many felt could not, would not fall victim to Germany’s submarine warfare against British shipping. It’s an intriguing story, and when told by Erik Larson in Dead Wake: The Last Crossing of the Lusitania, it becomes an intensely personal, vivid tale.

A review of The Last Astronaut by David Wellington

I'm going to tell you that I have a very low threshold for scary things. So if I say that a book freaked me out you can take it with a grain of salt. That said, The Last Astronaut, which was a bit of Alien, a bit of The Martian and some Major Tom vibes thrown in, made me read with one eye closed for the latter half of the book as the creeping dread of the unknown grew.

A review of The Lost Girls of Paris by Pam Jenoff

It's 1946 and a young widow named Grace Healey stumbles upon a suitcase left under a bench in Grand Central Terminal in New York City. At the same moment, a former British special agent named Eleanor Trigg is hit by a car outside the station and killed instantly. What follows next is a tangled web of intrigue, espionage, heartbreak and heroism. 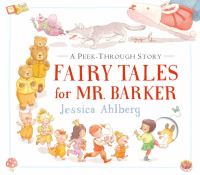 A review of Fairy Tales for Mr. Barker by Jessica Ahlberg

I grew up loving the work of Janet and Allan Ahlberg, so I was thrilled when I discovered Fairy Tales for Mr. Barker – a picture book written and illustrated by their daughter, Jessica Ahlberg. This cumulative story follows Lucy and her dog, Mr. Barker, through a series of fairy tales.

A review of Troubled Waters by Sharon Shinn

I used to love to wander through a bookstore and feed my reading need (this on top of checking many stacks of books out of the library). But at some point I stopped buying all those print copies, partially for space reasons, partially because of the changing bookstore landscape and partially because I was reading more and more digitally. So what's my version of strolling through the bookstore aisles? Late in the evening I look for ebook deals online to see if there's anything that catches my fancy (this on top of the library books I check out electronically and read on Libby!).