Home > Library Cards and Borrowing
Back to top 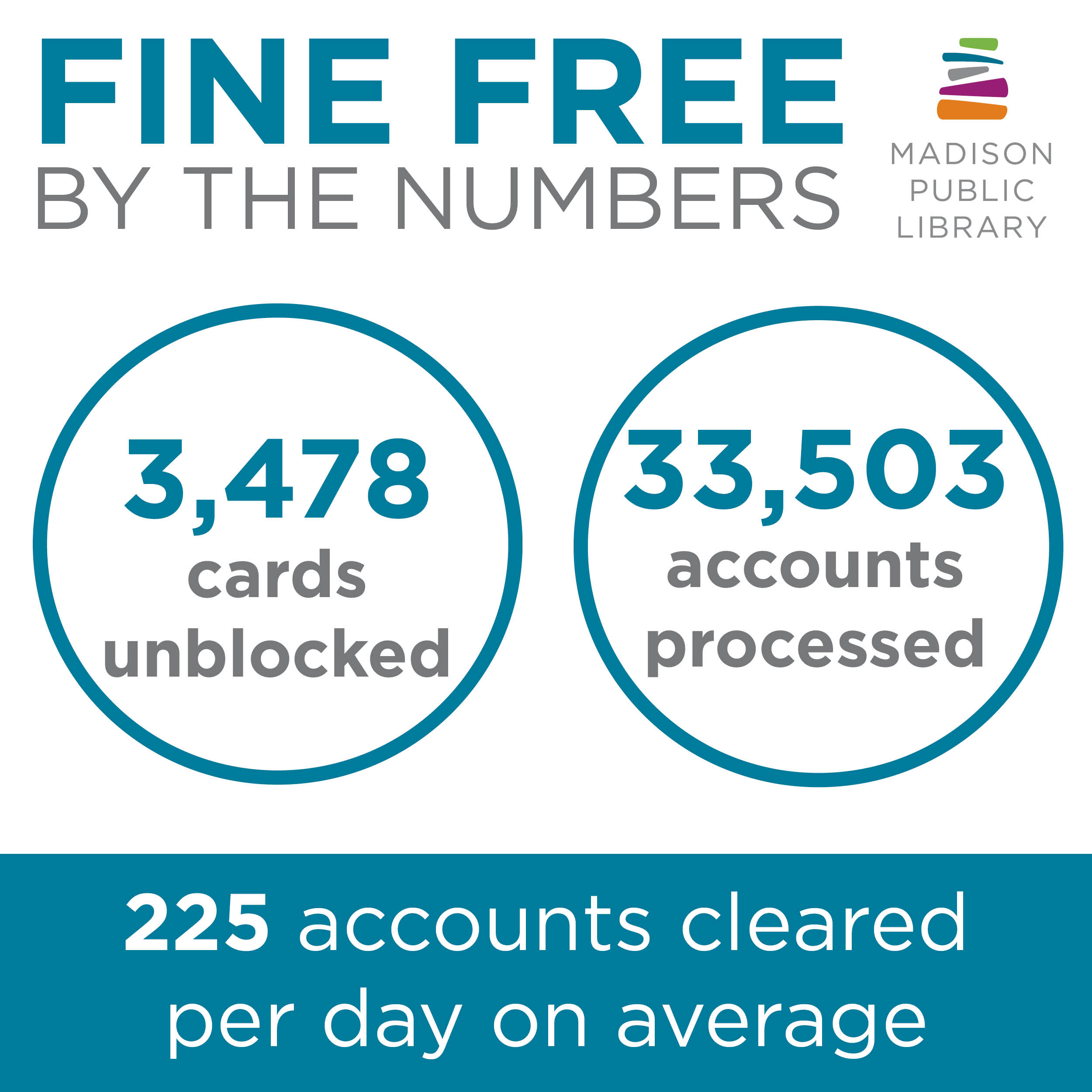 We stopped assessing overdue fines in August 2020, but we've been engaged in a months-long process to clear existing accounts of fines. A team of 15 library workers helped manually clear fines from 33,503 accounts one-by-one. 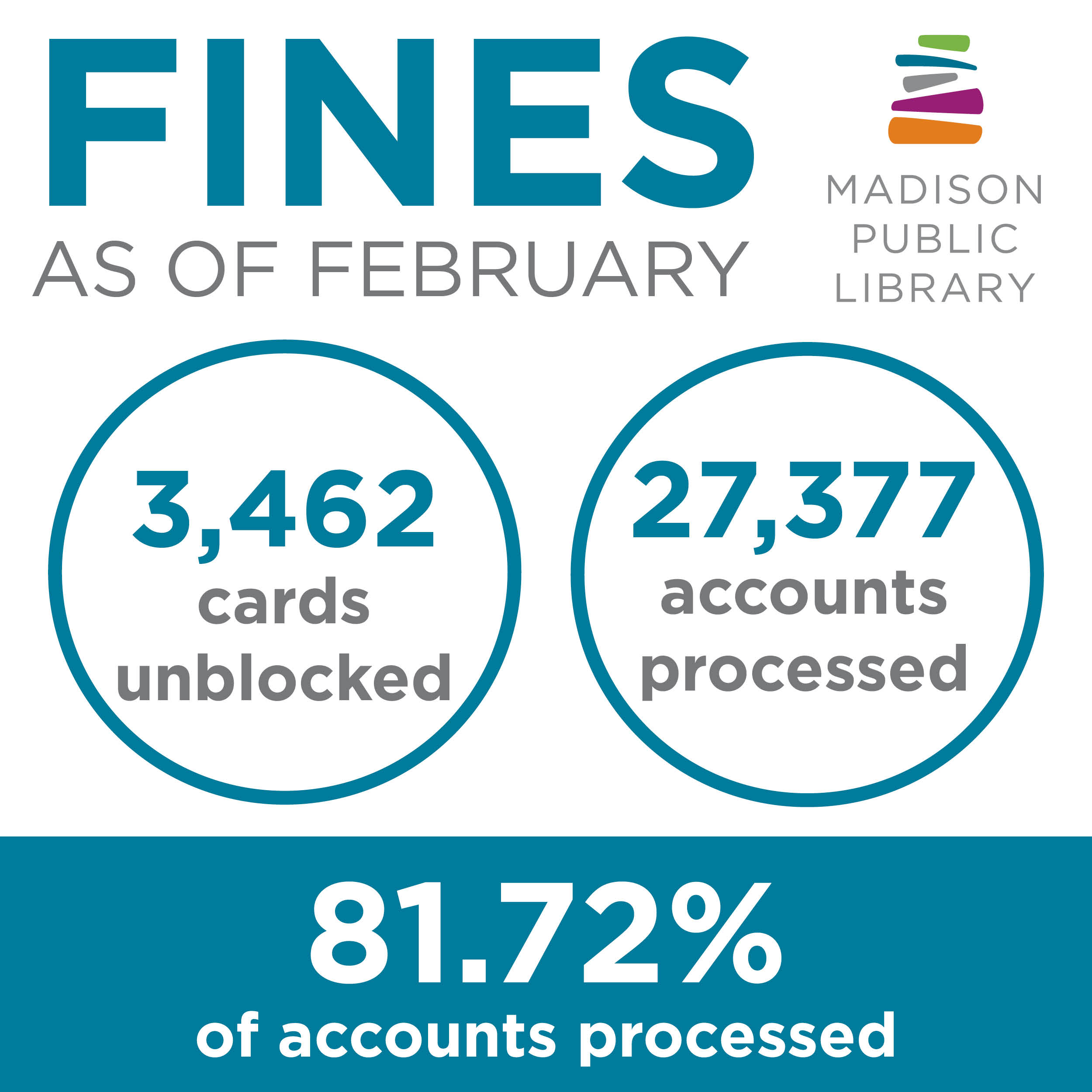 As of the end of February we have manually waived fines from 27,377 accounts, which means we're more than 80% through! Remember, if you had a blocked card, but are still having issues accessing your account, you may need to renew or update your information to regain the use of your library card. Call 608-266-6300 to speak to library staff about accessing your account.

Here's a look at the progress we've made on our fine free journey over the past few months. As of the end of January, we are officially more than halfway through processing the 36,000+ accounts that have fines.

Fines as of December

Fines as of January

In August, we stopped assessing overdue fines, but we are continuing to work on waiving existing fines. We wanted to provide an overview of where we are in that process, and will continue to provide updates as they become available. In a report of fines as of August, we learned we had 36,150 cards with fines, and 3,322 cards that were blocked because of fines.  We had a total of $274,134.29 in existing fines that will eventually be waived.

We have begun waiving these fines in 3 ways:

This process - which must be done manually one account at a time - will continue to throughout the year, and we'll give you updated reports.
Keep in mind, each of these applies only to fines for materials checked out at Madison Public Libraries, but since the majority of SCLS libraries are now fine free, the numbers of Madison residents affected by fines outside Madison Public Library will likely be minimal. This waiving will not waive lost/damaged charges, so when the process is complete, we will still have some people blocked from using their card due to charges of over $20 for lost/damaged items.

We'll notify as many people as we can by email, and send letters to those accounts without an active email address. 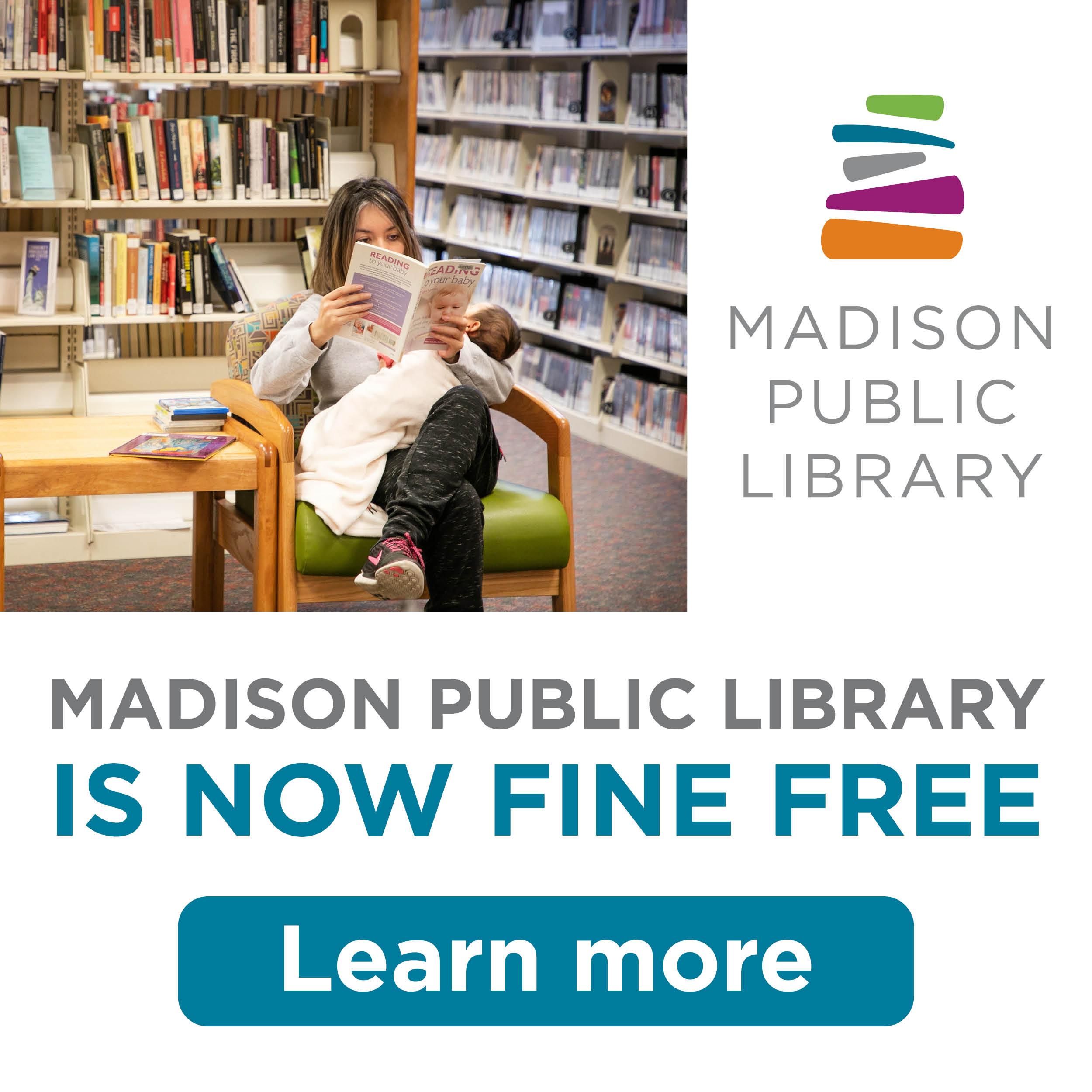 “Madison Public Library is proud to support our commitment to equity and literacy. By eliminating nearly all overdue fines and ceasing to use a collections agency, we want to encourage even more Madisonians to use the library by removing those barriers to library services,” said Library Director Greg Mickells. “Especially now, we need to make our libraries more accessible.”

“Madison Public Library has joined public libraries across the nation that recognize library fines as an equity issue,” said Mayor Satya Rhodes-Conway. “By eliminating fines, nearly 10,000 library users will be able to check out library materials again and take advantage of all that our award-winning libraries have to offer.”

In August of 2019, the Library Board and library staff began to explore the costs and benefits of moving to a fine free model, and in July 2020, the Library Board passed a proposed 2021 operating budget that included the elimination of fine revenue. At its August 6, 2020, board meeting, the Library Board formally passed an updated policy eliminating the charging of overdue fines and eliminating the use of a collections agency, which had been used to collect outstanding library charges of over $50.00. The library has not assessed fines since closing due to COVID-19 on March 17, 2020.

In 2019, library staff reviewed data on borrowing trends, cardholder trends, use patterns of other fine free libraries, and revenue generated by overdue fines. At that time, it became clear that overdue fines, and the blocked library cards that often result from fines, disproportionately affected libraries serving neighborhoods with lower incomes and higher percentages of residents of color.

“We know that some library customers are unable to check out library materials due to fines, and in keeping with our commitment to equity and access to public libraries, we felt that this was the right time to eliminate overdue fines and the use of a collection agency,” said Jaime Healy-Plotkin, Madison Public Library Board President. “We made this decision during a particularly difficult budget discussion, but now more than ever, public libraries are valuable community assets that should be available for all.”

In addition, library customers will still be charged replacement costs for items that are lost or damaged.

Library staff will work with all partners and vendors in the month of August and will work with affected customers during the transition period. Library customers may not notice an immediate change to their library records. Questions about library accounts can be addressed to the library at madcirc@madisonpubliclibrary.org or 608-266-6357

Find out how many books you can check out, how many holds you can have, etc.

Don't have a card yet? Apply for one!

Get access to all the library has to offer. Choose between virtual and a full service card.

A safe way to get physical materials from the library!